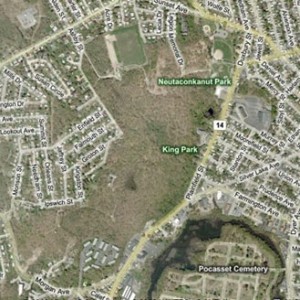 Flying over the densely populated Silver Lake/Olneyville area in Providence, with its unique, tightly-woven pattern of streets lined with multi-family residence, you will see an oasis of Green; 88-acres of ‘green – life-giving open space.’ This wilderness park, situated in the heart of the most densely populated area of the City, unique in the Providence Park System, is 88 acres of trees, fields, and wild flowers, interspersed with valleys, ravines, glacial boulders, stone walls, fresh water springs and brooks. The Hill is the natural habitat for a multitude of small woodland animals including deer, fox, and wild turkey.

Rich in history, the Great Hill of Neutaconkanut was the northwest boundary in the land agreement between Roger Williams, founder of our state, and the Narragansett Sachems.

In 1829, the King family purchased 200 acres of the Neutaconkanut Hill land, from heirs of the Borden family. In 1892, the Public Park Commission, in their recommendation to purchase the lands, wrote to the City fathers, “On this part, Nature has made a natural park more perfect than the hand of man could devise. On a Sunday afternoon as many as 1000 people left their horse-cars on Plainfield St. and ascended the Hill.”

Neutaconkanut is located on Plainfield St. in Providence. Owned by the City of Providence, the forested hill was ‘forgotten’ for many years. Through the efforts of the Neutaconkanut Hill Conservancy, Inc. (NHC), in cooperation with the Providence Parks Department, this hidden woodland-treasurer has been making a ‘debut’ these past few years.

The Hill is the highest point in Providence. (Elevation: 296 feet above sea level.) From the hilltop meadow and from several hiking trails are spectacular views of the City and nearly a quarter of the State. In all seasons, the beauty of this 88-acre woodland is a classroom-in-nature. The forested woodlands, with several miles of hiking/walking trails*, provide a panorama of picturesque stone walls, unique geological formations, natural springs and brooks, wild flowers and berries. *The WPA originally created the recently restored paths in the 1930s. 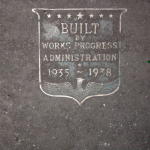 The WPA originally created the recently restored paths in the 1930s.

Wildlife abounds on the Hill. No other expanse of natural woodland such as this exists in the City of Providence.

All aspects of this Hill…impact on Man in his pursuit for health, history, community, knowledge and beauty