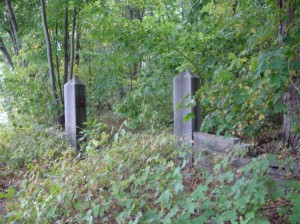 The geology of the Hill is unique with its beautiful rock out-croppings, remnants of the Ice Age glaciers.

Neutaconkanut Hill is a remarkable eminence in Johnston (before annexation to Providence), and commands a magnificent view of the surrounding country.

The rocks on this eminence are alternate strata of micaceous and hornblende slate; the former being very much contorted. On the south side of the hill there may be seen a huge boulder of hornblende rock poised upon the mica slate, as represented in the following diagram

This huge boulder, sometime in the 1950s, was deemed dangerous as it perched at the top of the Hill above the former (and fondly remembered) 1025 Club. The rock was ‘shattered,’ and the remains sit at the site. 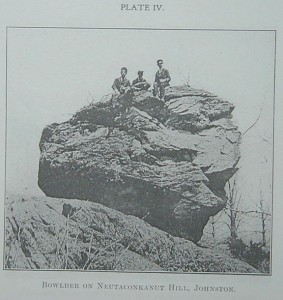 From   The Banner Geological Library, Leland Stanford Junior University, Report on the Geological and Agricultural SURVEY of the state of Rhode Island.  Made under a resolve of legislature in the year 1839/ By Charles T. Jackson, MD page 82, Neutaconkanut Hill. Providence: B. Cranston & Co. 1840.